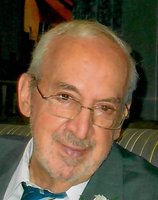 Born on November 2, 1936 in Long Branch, NJ, he was the son of the late Joseph and Ida (Amorino) Sirianni.

Don had served in the U.S. Army during the Vietnam Era from 1958 to 1964. He had been a machine operator for Heraeus Amersil Corp., Fairfield, NJ before retiring.

He was a parishioner of St. Patrick R.C. Church, Belvidere, NJ.

Contributions may be made in Donald’s name to St. Jude Children’s Hospital.