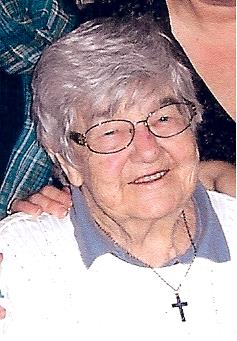 Joan was born on June 27, 1930 in Bloomfield, NJ. She was the daughter of the late John Walsh and Margaret Wilson Walsh.

Joan and her sisters, Marjorie and Irene, grew up in the family business, Walsh's Delicatessen & Luncheonette. She was an athlete in school participating in softball, basketball, and field hockey. She coached a girls' softball team in Belvidere in the 1960's. Joan won many trophies for bowling in WIBC National Tournaments. She was also an avid musician who played the trumpet in the Bloomfield High School Band. She later married a fellow musician, Jay T. Richards and performed together as charter members of the Bloomfield Civic Band. Joan also played trumpet with the Hackettstown Band, the Allentown Band, Fred Waring's Band and Earl Held's All Girl Band.

Joan worked for Prudential Insurance Co. after graduating from high school. She was a key punch operator for a couple of companies before joining M&M Mars in Hackettstown, from which she retired in 1997.

She was a member of the Belvidere Woman's Club, Sunny Seniors, M&M Mars Retirees, the Phillipsburg Area Senior Center, and the Red Gems branch of the Red Hatters.

Joan was predeceased in death by her husband Jay T. Richards, who passed away in 1975.

Funeral Services will be held 12 Noon, Tuesday, October 10, 2017 at MacFadden Funeral Home, 325 Hardwick Street, Belvidere, NJ. Interment will follow in the Easton Cemetery, Easton, PA. Friends may call from 11:00 AM to the time of service at the funeral home.

To send flowers to the family or plant a tree in memory of Joan Richards, please visit Tribute Store
Tuesday
10
October

Share Your Memory of
Joan
Upload Your Memory View All Memories
Be the first to upload a memory!
Share A Memory
Send Flowers
Plant a Tree