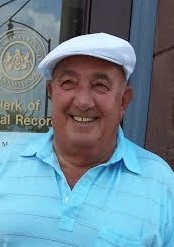 Please share a memory of Ronald to include in a keepsake book for family and friends.
View Tribute Book
Ronald Calascibetta, Sr., 85, died on Wednesday, May 23, 2018 at St. Luke's Warren Campus with his loving wife by his side. Born on August 2, 1932, he was the son of the late Carmelo Calascibetta and Mary Geraci. Ron often spoke of his childhood. He grew up poor, which shaped him into the person we all knew and loved. He spoke of stealing chickens for food, leading to his strict red meat only diet in his older age. It also led to his hatred of the current ripped "dungarees" fashion style, when kids at his age used to be made fun of for wearing old clothing. After graduating high school, he joined the Unites States Navy and served as a ship electrician during the Korean War. During this time, he also met the love of his life, Barbara Verratti, at an armed forces dance. They exchanged letters for one year before getting married on October 5, 1957. They shared a wonderful marriage of 60 years together. Ron worked as a Coca Cola owner and operator before retiring. Ron is survived by his wife, Barbara Calascibetta; his son, Ronald Calascibetta, Jr. and wife Margaret; three grandchildren, Melissa, Megan and Carmelo Calascibetta. Ron loved life, family, friends and all things outdoors. He was an avid hunter, fisherman, and traveler. He enjoyed playing golf, hands of poker, horseshoes, rooting for the N.Y. Giants and going to sports games of his grandchildren. He was a member of the Veterans of Foreign Wars and the American Legion. He could not resist a nice steak with clams and a cold glass of beer, or a handful of pistachios. Anyone who truly knew Ron will remember his great sense of humor. Whether it was by simply telling a joke, "pull my finger", or by bribing young cousins to say a curse word, he would always have a whole room laughing. He was a kind-hearted and loving man, willing to lend a helping hand however he could. All that knew him were blessed with the wisdom he shared over his 85 years. Ron truly lived a long and happy life. He will be deeply missed by all. A Mass of Christian Burial will be celebrated 11:00 AM, Saturday, June 2, 2018 at St. Patrick R.C. Church, 327 Greenwich Street, Belvidere, NJ 07823 under the direction of MacFadden Funeral Home, Belvidere, NJ. Online condolences may be sent to www.MacFaddenFuneralHome.com In lieu of flowers, the family requests contributions to be made in Ronald's name to the American Legion Post #131, 122 Greenwich Street, Belvidere, NJ 07823.
To send flowers to the family or plant a tree in memory of Ronald Calascibetta, please visit Tribute Store
Saturday
2
June

Share Your Memory of
Ronald
Upload Your Memory View All Memories
Be the first to upload a memory!
Share A Memory
Send Flowers
Plant a Tree