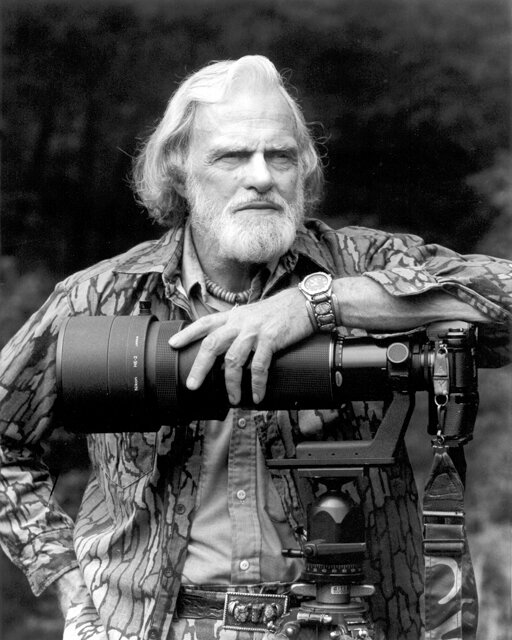 Please share a memory of Leonard to include in a keepsake book for family and friends.
View Tribute Book

As a young man, Lennie was employed by the George Washington Council of Boy Scouts for 17 years, working year-round as a camp ranger at Camp Pahaquarra.  He and Homer Hicks owned and operated Adventure Unlimited, where he guided canoe trips for Boy Scouts into the Canadian wilderness near Lac Landron, Quebec each summer for many years.  He taught outdoor education for special needs students at Amackassin School in Blairstown, NJ.

As a young man living on Fair View Farm in Belvidere, he started his study of wildlife running trap lines and observing animal behavior. In 1965 Lennie became a full-time wildlife photographer, author and lecturer.  He became the most published wildlife photographer in the country with more than 1800 magazine covers to his credit.  He has taken millions of photographs and hundreds of hours of broadcast quality video footage. He has 31 published books and contributed more than 1500 articles for wildlife and hunting magazines.  His more than 4,500 lectures for schools, camps and community groups and photographic seminars have reached and educated thousands of students and adults.  He has received numerous notes of appreciation over the years from those who had their lives influenced by his example.

He was considered one of the country’s top naturalists and was the author of 31 books on wildlife and photography including the Deer of North America and How I Photograph Wildlife and Nature. He wrote monthly columns for Deer and Deer Hunting magazine and Outdoor Photographer. Currently his columns on White-tailed deer are still being published in Whitetail Times magazine.

Lennie’s work included extensive travel to all seven continents and all 50 US states. His favorite locations included Africa’s Kenya and Tanzania, Denali National Park in Alaska and Yellowstone National Park. He often spent months in each place getting to know the “wildlife up close and personal” which his photographs reflected.

Some of the awards he received include the 1987 Outdoor Writers Association of America’s “Excellence in Craft” award and in 1990 he was awarded an honorary Doctor of Science from Colorado State University. In 1997 he received the North American Nature Photographers Association’s (NANPA) Lifetime Achievement Award, the OWAA Jade of chiefs for conservation writings and the OWAA 2005 Best Book Award for the Encyclopedia of Deer.

Lennie was a natural teacher, and everyone received nature lessons when visiting him at home. Even in his later years, he constantly observed life on his pond, the deer, birds of all kinds and the actions of his very tame chipmunks.

Lennie’s life was based on Mark 9:23 “I Believe” which was printed on his business correspondence. When autographing books, he always wrote, “God be with you.” As he so often said, “If I die tonight, I’ve had a fantastic life.”

His affection will be sorely missed by family and friends.

On Thursday November 10, 2022, friends and family may call from 6:00 pm to 8:00 pm at MacFadden Funeral Home, 325 Hardwick Street, Belvidere, NJ. A funeral service will be held Friday, November 11,2022, at 11:00 am at United Presbyterian Church of Belvidere with a calling hour from 10:00 am to the time of service. Burial will follow in Summerfield Cemetery.

Share Your Memory of
Leonard
Upload Your Memory View All Memories
Be the first to upload a memory!
Share A Memory
Plant a Tree